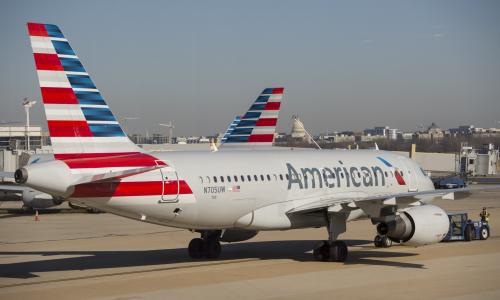 American Airlines acquired US Air in 2015 and Marriott acquired Starwood in 2016, making each the largest US Airline and largest US hotel chain respectively.

American is now allowing both Citibank, its longtime incumbent credit card partner, and Barclays, which had serviced US Air, to issue personal and business American Airlines branded credit cards.   Barclays had been barred from issuing new cards for a while, but now gets exclusive access to market inside the airplanes and the airports (excluding Admirals Club which goes to Citi, along with the website, direct market channels, etc.).

In practice under the new American Airlines system, Barclays and Citibank are now competing against each other to provide the most valuable consumer card, the most valuable business card and the best signup bonuses.   American is winning - they are being rewarded for all of these new accounts at both Citibank and Barclays, and selling miles to both.   Customers also seem to be winning.   I was on a flight where a flight attendant told a passenger next to me to open both, and that means customers can get two products with separate features (for example, the Barclays Aviator cards give 3,000 Elite Qualifying Dollars for every $25,000 in spend).   They are also getting access to better products with Citibank now offering a high end product in The Citi® / AAdvantage® Executive World Elite™ Mastercard® and a low end no-fee product in American Airlines AAdvantage MileUp? Card.

Marriott has also maintained both Chase, its incumbent credit card partner, and American Express, which had serviced Starwood, as credit card partners.  Their press releases indicate that Chase will be offering the standard Marriott card with  Amex offering higher end consumer cards and business cards.    Again, Marriott is probably something of a winner here – like American they are being rewarded for new accounts with both Amex and Chase and will be selling miles to both.

However, unlike the case with American Airlines, consumers seem to be losers here, especially those who had been part of Amex’s exceptional successful and popular Starwood loyalty card products.   Those cards which had been the most valuable travel rewards credit cards since  the early 2000s until recently were debased at the beginning of this month.   Instead of continuing to provide one Starwood point per dollar, it will now only offer 2 Marriott points.   Since Marriott itself is applying a 1 to 3 conversion ratio, it means that the Starwood product will now produce 33% fewer points.   Likewise, the new Chase Marriott card is also giving only 2 Marriott points on non-Marriott spend which is more than it previously delivered, but still 33% less value that loyalty to Starwood had delivered through Amex.  In short, Marriott has not delivered an enhancement for credit card loyalty that it appeared that they might when they instituted a 1 Starwood to 3 Marriott conversion ratio.   They recognized that Starwood was a better program, but then set out to destroy it, and are now making their own program less valuable through devaluations and removal of their 7 Night Hotel And Air Packages.