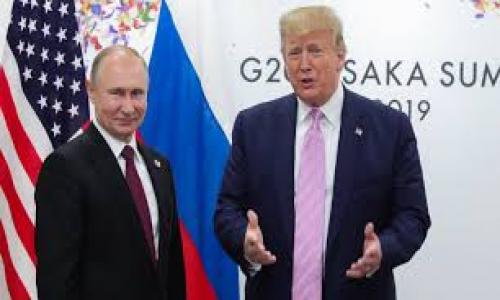 These are dark days for our country, if not yet for financial markets.

While we have survived and even prospered with President Trump for three years, he is now highly unsteady.

Putin recognizes this.   So too does Erdogan.   Their extensive kompromat on the President and business dealings with his family have given them the ability to call in their chips.   They have told the President to stop backing the Kurdish rebels, our allies, in Syria and a massacre is already underway in Turkey.

Obama, too, did not help the U.S.’s international standing when he drew a line in the sand concerning Assad’s use of chemical weapons, before proceeding to do nothing.   However, the Trump reversal and abandonment of our allies in Syria have thrust the dynamics of our post-World War II foreign policy into a very dangerous zone.

So, too, obviously, do Trump's dealings with Ukraine and all of Eastern Europe.

Our Republican Senate continues to do nothing.   When (and if) they do finally act, they will say that none of this was foreseeable and they will be forgiven by voters.

Meanwhile, we have no government to speak of and to provide leadership or moral authority, especially vis-a-vis to China.   Instead, we seem to be looking to Adam Silver, Nike, Apple, Starbucks and Delta for moral leadership.

This entire situation puts U.S. companies in a situation where they cannot continue to succeed and expand internationally in the same way that they have over the last two decades.  There will have to be consequences for our efforts to turn a blind eye to politics while we enjoy our wealth creation during this time.   Equity markets will need to be repriced.

There is very little to lose by raising cash now.   One-year CDs seem like a good place to hang out.

Full disclosure: The author is long Apple and Starbucks.