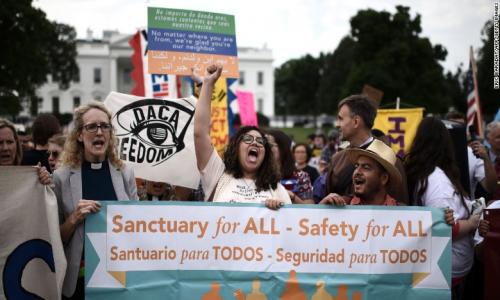 It’s entirely possible that America’s 800,000 Dreamers will actually get expelled from the United States and sent to countries they know absolutely nothing about and speak not a whit of their language.

These are Americans in every way save that they were born outside our borders and crossed into the U.S. without papers in the arms of their parents seeking a better life.

For a country of immigrants the idea that all these young people will be forcibly ejected from our land in the near future is chilling.  But, given the ugly and totally divided political scene that obtains now, it’s not only possible, it is highly likely that in a matter of months all 800,000 of them will be expelled.

Donald Trump, who could do something with that big pen of his, has often talked about how much “we love” our Dreamers.  But, we all know by now that Donald Trump loves only one person – Donald Trump.  And, that he will only help the Dreamers if there is something for him out of the “deal.”   (One part of me wonders whether Trump is moving this group closer and closer to expulsion because his grandfather sought to return to Austria as a young man after he soured on the U.S., only to be refused entry by that country.  Could he actually, consciously or unconsciously, be playing all this out for some contorted replay of a family humiliation at the hands of a totally unrelated country?)

And, the deal - if there is one - falls to Congress.  While many speak about their wish to help solve this problem, each side comes to the table with hard conditions.  And, conditions on one side require spending huge amounts of money on border security.  And, border security means, in this case billions to build Donald Trump’s wall.

In fact, in the end, the Dreamers may be expelled because of Donald Trump’s obsession with a multi-billion dollar border wall.

So, a country that for centuries embraced immigrants as the engine of all that has made it strong and distinctive is now about to build a wall to keep new ones out and to expel almost a million young and talented young people – in every way Americans save paper credentials.

Since Donald Trump assumed office, we have seen many things that shake the foundation of modern America.  Nonetheless, expelling the Dreamers is unthinkable and would be as big if not bigger than anything to date.  Doing so would be an open wound for the country, one that would ooze for centuries to come.

The world is watching!