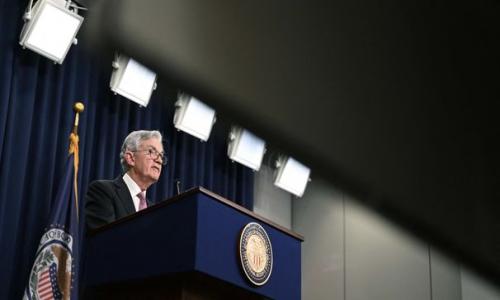 The Federal Reserve has finally begun to act according to its mandate to maintain price stability, but inflation is already running rampant.  Today’s move is just the beginning of moves that will be necessary.  The Fed’s statement left us with little in the way of guidance in terms of how far and how fast it is going, but Powell’s press conference did not.

Powell addressed the American public by saying that inflation is much too high and supply chain disruptions are being exacerbated by Russia’s invasion of Ukraine and the COVID lockdowns in China.  In other words, it is possible that we still haven’t seen peak inflation.

Powell himself seems to believe the Fed is way behind the curve and is going to need to be very hawkish.   Whereas economists had previously looked for another 50 basis points move at the conclusion of the June 14-15 meeting, and 25 basis points at each of its four remaining meetings, Powell introduced the possibility that there may be a series of 50 basis point moves through the year.  Depositors can expect much higher rates in savings and money market accounts after today’s move and through the year.

You may want to bookmark BestCashCow’s online savings page here.   You should also consider savings rates where you live here.

Alternatively, you may wish to follow savings rate changes through RatesAndInfo.com, our partner site that displays online and local rates on a single table.

CD rates are also obviously going up.   We warned about rushing into CDs last week in this article.    Rates have gone up since then with leading 1-year CD rates above 2% and 5-year CD rates now above 3%.   CD rates will get more and more tempting, especially when we have not seen anything for cautious investors to even nibble on since the beginning of the pandemic.

Before jumping into a CD, folks need to play around the CME’s Federal Reserve Open Market Committee’s Fedwatch tool here.   It demonstrates the probabilities assigned by to different interest rates by economists’ targets at the end of each upcoming Fed meeting.   As of this writing, it indicates a 79% probability of a target rate of 3.25% to 3.50% following the December meeting, some seven months from now, and a 92.5% probably that we will be at that level following the July 2023 meeting.

Plenty of well known and respected economists, like Harvard’s Ken Rogoff, think the Fed is going to need to move much further and much faster in order to get the “perfect storm” of inflation under control.

Whatever happens, it should be an interesting year for savings and CD rates.