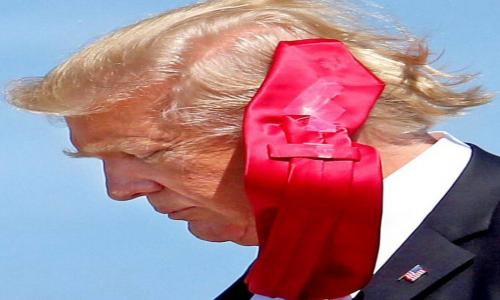 Who in the world would think of scotch taping the thin end of a tie to the back of the wide end.  It is ugly and unseemly.

Tying a tie is not a big deal; most men have learned as children from their fathers how to do it.  And, over time, ties may have changed in color, width and fabric, but not in the mechanics of tying the bloody thing.

A well tied tie does provides a nice triangular knot at the neck.  It also offers an attractive, neat and wide, arrow-shaped contrasting fabric down the length of the shirt, stopping at or just beyond the belt line.  It also folds, tucks, and makes invisible the thinner end section under a strap behind the larger, wider one.

The tie itself has been the subject of considerable discussion since its inception in the 17th Century.  But for many years, it has retained its significant role as a fashion statement and one of very few ways a man can add color and design to his otherwise drab, formal attire.   For some with an imagination, it is hard to miss that the pointed tie is also a distinctly male statement about place and manhood, pointing as it does directly at his most defining body part.

So now Trump has brought something new to the table.  Wearing ties all of the time, perhaps even to bed, he has introduced two new adaptations.  The first is that he wears the wider, pointed end far lower than accepted practice.  Dipping it well below the belt, perhaps he is clearly and triumphantly reminding all of his manhood.  A psychiatrist might have a heyday with this.

The second adaptation, equally distinctive, is that he consistently scotch tapes the thinner, shorter end to the back of the wider end.  When he walks around in windy settings, the scotch tape is visible to all.  Not very presidential!

Using scotch tape is essential, however, if he wants to present a totally neat appearance while wearing, as he does always, the wider pointed end well below the belt than is customary.  By so doing, the thinner ends of his ties would look silly and unkempt were he to allow them to blow hither that thither in the wind.  (Note: the thinner end for most tie wearers fits naturally under a strap attached to the inner side of the wider section.  Because Trump wears his ties with the wider end much lower than normal, the thinner end cannot be contained by the hidden strap on the backside of the longer end.)

Thus, Trump is forced to use scotch tape to contain the otherwise liberated, shorter and thinner end of his ties.

As so, the story would end here.  All this would be true for anyone else desiring to wear his tie as Trump does.  But, that shouldn’t have be the case for Trump who manufactures his own line of ties.  With such control and opportunity, any good businessman would have come up by now with an adaptation (perhaps a second hidden strap, a button, or Velcro) .  Given that he always wears his ties as described, given that he has his own line of ties, and given that he prides himself on his business acumen, one is forced to wonder if he really has common business sense.  He has had all the time and all wherewithal to solve this problem without having had to resort, day in and day out, to scotch tape which is both tacky and a red flag as to the lack of his own business savvy.