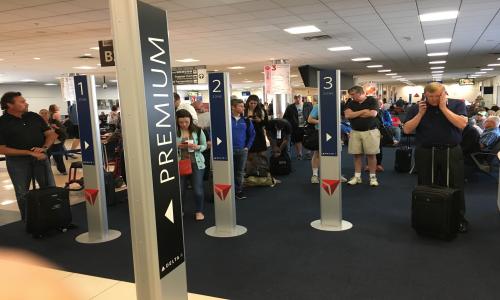 The Totalitarian Reign of the Airlines

Like many other things in the United States these days, the familiar has become less predictable and the veneer of civility far less true.

Airlines have become, clearly, a flashing red light about a crumbling civil society and a rising totalitarian state.

In fact, they had already torn at the country’s fabric well before Trump captured the presidency.

After years of adding one new rule and attendant new cost after another, for services previously included in their single fare, they seem to be sufficiently emboldened to hit new lows and to charge more and more for less and less.  It does not seem far-fetched soon to expect coin operated toilet paper dispensers in the washrooms.

But the legion of new costs and rules are far less disturbing than the mindset that has clearly set in in the corporate offices of each and every carrier.  That mindset of total distain and disregard for passengers now permeates all that they do in setting policy and in their behavior toward passengers.

And, most alarming, is that passengers sheepishly accept it all like lambs in pasture.

United’s recent and shocking behavior toward a passenger in Chicago who refused to give up his seat for an employee was over the top.  The thugs they sent aboard to attack and force him off the plane made great television, but their total disregard for common human dignity was absolutely in keeping with their modus operandi today.

The Chicago incident had, decidedly, the feel of Nazi Germany.  And, the indignity of what happened then for one passenger is repeated daily in lots of ways for many others at the time of booking, waiting to board, and on board.

Enjoying their power, they have for some time displayed their distain and disregard by forcing those who pay less to board only after all those who either paid more or who were frequent flyers.  We have all come to accept the indignities of standing by while the “rich and powerful” board.

Delta, United and now American Airlines have managed, quietly, to introduce a still more ugly way to express their distain for the majority of paying customers.

Delta especially is providing a singularly horrifying visual as well as a decidedly new intimidation strategy.  Today, in many airports, it has added numbered or lettered columns behind which passengers must line up in rows before boarding.  It is visually an exceedingly ugly reminder of Nazi concentration camps where new arrivals would be forced to line up by age, gender, and physical attributes before a few were allowed to live and the majority marched off to their deaths.  It is a reminder not lost, I am sure, on Delta’s management and certainly effective in further dehumanizing its passengers.

I would argue, in fact, that the addition of these lines dividing passengers along a continuum of elite to poor slobs is even more despicable than what was done to one passenger by United.  And, I am sure that it will not be long before all airlines adopt “lines” and even add a new line, probably out near the bathrooms, for fat people, poorly dressed people, people with colds, and people with funny names.