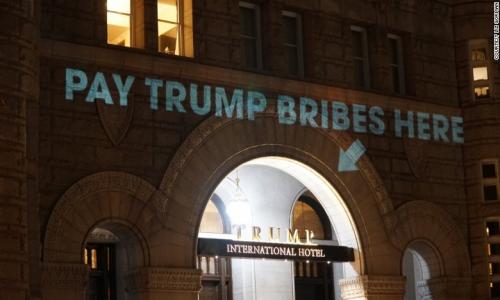 In 2013, Donald Trump entered into a 60-year lease from the General Services Administration for the renovation of the old post office to become the Trump International Hotel in Washington.   The property is leased for $180 million and in spite of a clear prohibition in the lease that ownership not benefit any elected official, the hotel is a strategic mechanism for Saudi and Russian officials to funnel money to the President in violation of the emoluments clause on the US Constitution.

It is widely known throughout the hotel industry that every major US hotel chain and China’s Anbang (which was aggressively courting Starwood at the time) took a look at the old post office, but none could come anywhere near the $180 million that Trump was bidding.

This past week, Trump’s children (Donald Jr. and Eric) announced that they are “selling the hotel” for $500 million.   What the Trump Organization is really seeking to sell is what they own and that is 54-year (or so) outstanding lease on the property.   Even with the property improvements that the Trump Organization has made to the property, it is unimaginable that any rational investor could be willing to spend three times what the industry was not willing to pay only six years ago.

Rather, the $500 million number is a desperate and brazen plea by the Trump family for a bribe from Russia or Saudi Arabia.   Whether they get that number or some lower number, the mere offering of the outstanding lease on hotel at that completely unrealistic and non-market price point may in fact lay the grounds for yet another article of impeachment.

Article II, Section 4 of the US Constitution talks about bribery being impeachable, in addition to high crimes and misdemeanors.   The common law definition of bribery, according to Black’s Law Dictionary, includes not only offering, giving and receiving, but also “soliciting of any item of value to influence the actions of an official or other person in charge of a public or legal duty.”

It cannot be controverted that Trump's July 25 call with Ukrainian President Zelensky involved the appeal for, or solicitation, of a bribe and that he should be impeached and removed from office for that call alone.   Although perhaps less eggregious, the very appeal for, or solicitation, of a bribe in the form of an outlandish and unrealistic payment for the Trump Washington hotel may also be impeachable.