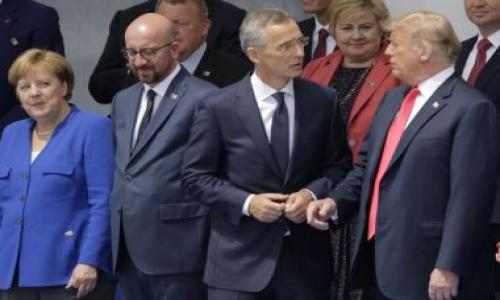 Trump’s Germany Rebuke for Russian Energy Dependence: An Extraordinary Turn in a Desperate Bid to Deflect the Mueller Probe

The evidence at this point is incontrovertible.   Donald Trump’s ascendency to the Presidency was obviously influenced by the Russian government;  In the 18 months since he has become President, Putin’s influence has become ever more clear.  The recent evidence that Trump may have been cultivated as a Russian asset as far back as 1987 is extraordinary.   While I personally am not entirely convinced of the long duration of the connections, I am convinced that Mueller needs to act promptly and decisively .

It is in Russia’s interest to create a break in the foundations of NATO, and it has been clear for weeks that Trump would arrive in Brussels and make this happen big time.

It is, nonetheless, surprising that Trump would attack Germany for its reliance on Russian energy.  In fact, Trump didn’t just say that Germany was “totally controlled by Russia” because of its dependence on natural gas.  He also said “Germany is a captive of Russia” and should not have given approval to Gazprom to construct the Nord Stream 2 pipeline.

Germany, to be clear, is an energy dependent economy.  In order to phase out reliance on nuclear power and coal, they rely in large part on cheap natural gas, and that natural gas comes from Russia.   Gasprom’s own releases show the dependence and the growth in dependence since 2010 with Germany now receiving over 53.44 billion cubic meters of natural gas.

Germany actively seeks other sources, but wood pellets and LNG shipped from the US is neither cost effective nor a scalable solution.

However, were Germany to find another solution or to figure out how to dramatically scale solar or wind, it would be devastating for Gazprom and for Russia.  And, for Trump to utter an attack on Germany which might embolden elements in Germany to accelerate these efforts is clearly not in Putin’s interests.

Whether it is realistic or not for Germany to reduce their dependence (it isn’t), the statement is a clear effort to deflect further evidence of Russia’s influence.   But, I think Putin will have a hard time accepting Trump’s explanation so he will likely turn the screws on Trump, resulting in more transparent efforts to remove US sanctions in the coming weeks.