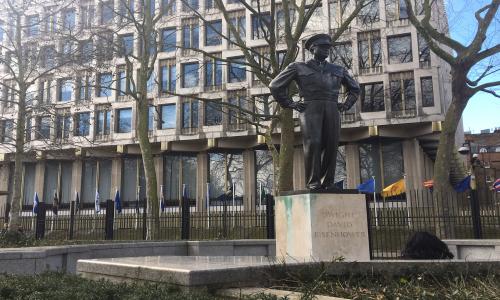 View from Oxford Street, London: Not as Distraught, Disturbed

Having spent the last few days in London in meetings with numerous Brits, I was surprised that even the most enlightened, educated in the UK are not exhibiting the same sense of panic and consternation about Trump and the recent US coup orchestrated by Russians that the majority of well educated Americans are experiencing.

The Brits are not outraged by the decisive interference of a foreign power – an adverse power – in the US electoral system.  They are not disturbed or surprised that a failed businessman would pose as a success and then seize the Presidency and the entire government with no other agenda that his own self-enrichment (and the adulation of the masses).  They are unfazed by the latest assertions – which are troubling to James Comey and the intelligence community – that Obama tapped Trump Tower.  They are indifferent to alarms raised by psychologists and psychiatrists, and the reality that our 241-year old experiment may be coming to an end.

In my discussions, when I probed further, I found that the British lack of concern about these events in the US is founded in a core believe that whatever the US faces today can be reversed in the next election cycle, whereas Brexit – if in fact pursued – cannot be.

While Brexit may have dire consequences for the UK, those with whom I met were ignoring the reality that the destructive nature of Trump’s agenda will not allow an easy reversal and may have very real implications for the US – and in fact the entire world – for generations.  (My own belief is that Brexit may cause Londoners to face higher GBP costs on their Dubai vacations and higher duties on their Audis and BMWs and Grohe appliances and may also result in the loss of some of London’s European oriented financial services job.  Yet London has become a global tax haven and recipient of global – not just European – capital.  At issue in the US is the future of the free world – something more serious by any token).

I also think that there are some historical factors affecting the British view.  While Americans and British think alike on a good many issues, the British – even those who are very fond of the US - do not share the view that I, and many Americans like me, have of American exceptionalism.  This view is that the US is so determined and so much in control of its destiny that it must always remain more vibrant, more just, more accepting.  It is more required, in our DNA, that we lead the world economically and politically in the 21st Century just as we did in the 20th Century.   Because Trump and his coup are an affront at the very core to American exceptionalism, we are distressed and despondent over recent events.  The Brits, by contrast, are fatalistic, and think that everything will be OK, or it won’t, and the world will go on, or it won’t, but that events cannot easily be controlled.

The Brits may have the more healthy view, and perhaps those of us Americans who are justifiably scared to death about Trump, and the demise of our country that he may bring about, can learn something from their approach.