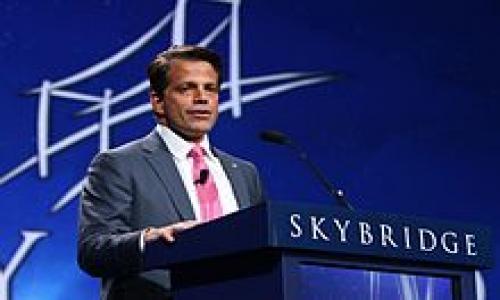 What is Anthony Scaramucci Thinking?

Anthony Scaramucci is one of the brightest minds on Wall Street and has been for decades.  He has used his extraordinary financial insight and business acumen to build funds, raise capital, invest successfully, and build a strong brand around his name.  In the years since he quit providing commentary on CNBC, he has become the only reason why anyone would dream of watching Fox Business.

Scaramucci quit supporting President Obama after his first election to support Mitt Romney in 2012.  In 2016, he initially supported Scott Walker and Jeb Bush.

Although brilliant (and a Tufts and Harvard Law alum), Scaramucci became a small part of a class of Republicans who hitched their wagons to the campaign of an overgrown 5-year old after he won the Republican nomination.

In return for his support, Scaramucci was clearly promised a senior role in the Administration and on January 12, the then-President elect announced he would be appointed to Director of the White House Office of Public Liaison and Intergovernmental Affairs.  For reasons that are still unclear, Scaramucci’s appointment never materialized.  His appointment may have failed as a result of incendiary comments he made to NY Magazine that month or of the sale of his firm, Skybridge Capital, to the Chinese.  Or, there may have been a falling out with Reince Prebus.

Whatever the circumstance, Scaramucci should have taken the opportunity to disappear and return to his other activities.

Instead, he has now replaced the mindless bimbos as the Trump proxy sent out to defend his position across CNN and the media.

While brilliant, Scarmucci undermines his credibility when he defends Roger Stone and talks about his great working relationship with Paul Manafort.

For someone who has now been jilted to take on a role of mindlessly supporting the one who jilted him is odd.  Scaramucci is careful to explain that he has no investments in Russia, but he is clearly now calling into question his credibility and reputation, and willingly putting himself at risk as circumstantial evidence of the Russian coup turns into direct evidence.